After waiting for some time, I was happy when ASP.NET Core RC2 was recently released. This version should have debuted at the beginning of 2016, so imagine my anticipation and excitement to install it on my Linux machine and upgrade my project to this version.

To install this version of ASP.NET Core I started on this page and then I chose Linux -> Ubuntu 14.04. I followed the step-by-step instructions provided and after a while I could run the command dotnet -h in my terminal, and I saw this: 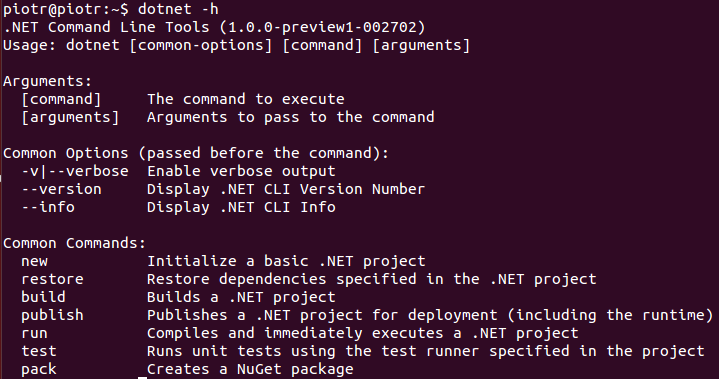 Another change is that a new package Microsoft.NETCore.App appeared among the dependencies, and it was a runtime for the application.

The changes where required also in the structure of project.json. Some properties are no longer valid, for example: commands. I must also specify the frameworks section and it looked like this:

I also added the section buildOptions with the following properties:

After upgrading to RC2, the ASP application became like an ordinary console application. That’s why I had to create a class with the main method where I started my ASP app. This class looked like this:

And I removed this line of code from Startup.cs

I also had to remove the line:

from the Startup.Configure method because now IIS is configured in Program.Main method.

After these steps, I could finally run the command:

And then I was able to build my app with the command dotnet build but I received two errors:

After this, my code compiled and I could run it with the command:

The result of this command was another error:

It looked like my application didn’t have a setup base path so it didn’t know where to look for appsettings.json. In the new version of ASP, you specify the app basepath by setting it in the ConfigurationBuilder with a code like this:

As you may notice, the new version of ASP also changed the names of the environmental variables. To set the runtime environment of an application you now use the variable ASPNETCORE_ENVIRONMENT.

After setting up the base path, I ran the application again and it ran without errors. I navigated to the localhost:5000 and saw this screen:

I think that this is proof that I managed to upgrade my ASP.NET Core application to the RC2 version. I must honestly say that this process was very boring and took me longer than I expected. I had to change the way I got the settings from the configuration file. I don’t know why I couldn’t get access to the extension method Get<> on the IConfigurationRoot. I’m not sure if it was removed or renamed, but I didn’t manage to find a replacement for this method. When I wrote this post, the RC2 version was fresh out the oven (3 days to be exact) so I am sure that I’ll find more information about this missing method soon.

By the way, this is my last technical post in the Daj się poznać contest series. In the next post, I’ll write a summary of my work for this contest.