In this post, I am writing about how I set up the server-side of my project - Notifier. The application will consist of REST API and Angular 2 single page application. For now, both parts will be hosted in the same ASP .NET Core application. To create this project I used yo aspnet generator. If you want to find out how I installed these tools check out this post. I entered in terminal command yo aspnet and after this I saw the following output, which gave me a choice of project type. 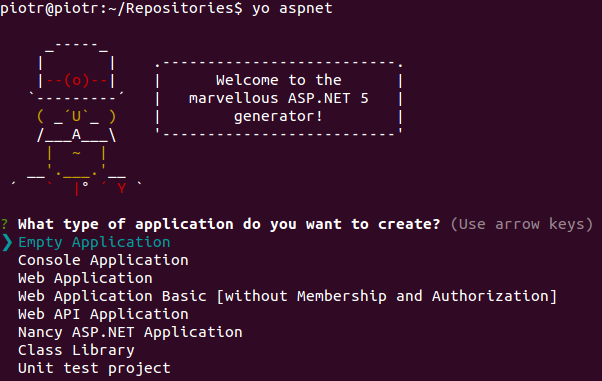 After this I was asked to enter the project name.

I typed Web. This name has an influence on the name of the folder which will be created when you hit enter. For the rest of this article this newly created folder will be referred to as the root of the project. When I opened this project in Visual Studio Code I could see the following structure of my project: 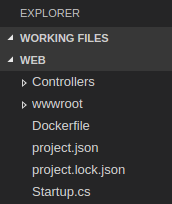 To be able to use Web API in my project I must import the following nuget package: Microsoft.AspNet.Mvc I did this by typing its name in project.json under the dependencies section. When you do this you can see a very nice intellisense which helps to choose the right package in right version. 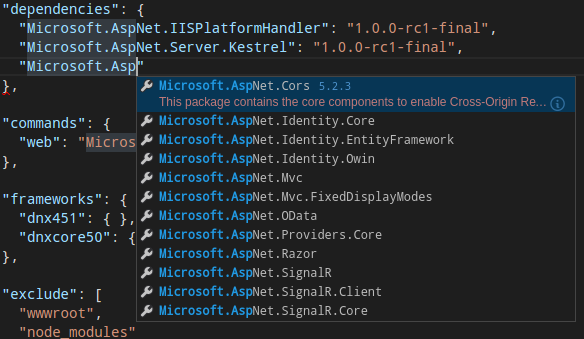 After this is what my dependency section looked like this:

The next thing which I did was issuing in terminal the command dnu restore. I must be in the root folder of the project to issue this command. Actually, Visual Studio Code shows at the top a strip with the button Restore which does exactly the same.

Then I changed my Startup file so it looks like this:

You may not know but MVC and Web API are now unified in ASP.NET Core 1.0. There’s no need to import something special for Web API. Then it was time to create first the WebApi controller. Inside the root of my project I created a folder Controllers (mkdir Controllers), and my goal was to create a dummy API controller inside it. I achieved my goal using yo aspnet generator. Firstly, I navigated to the newly created Controllers folder and then I used the command yo aspnet --help in it. That command showed me how I can create a WebApi controller. It turned out that there is command yo aspnet:WebApiController.

I executed it in terminal passing ValuesController as the name of my controller.

This command added file ValuesController.cs inside my Controllers folder.

And inside this file was the following code:

Note that you should not typed extension .cs. Generator adds this for you.

That was enough for me to test that I had the server side part of my application already working. To be sure about it, I had to run my application. I entered in terminal the command cd .. because I was still in the Controllers folder and you can start your application only from a root folder of your project and in this root folder I issued the command dnx web and I got the following output in terminal:

It seemed that everything was okay. This is how it looked when I did a get request under url http://localhost:5000/api/values using Postman.

What dnx web command does you can check in the file project.json in the section commands.

As you can see web is an alias for Microsoft.AspNet.Server.Kestrel. This is a cross platform server which is used to run ASP .NET Core applications. I’ll write more about ASP .NET Core during my series, but for now the setup of my Project’s server side is finished.

Yes, there’ll be more things to set up in the future but for now I don’t need them as I am happy with everything I have now. Now I can start to set up my client-side.